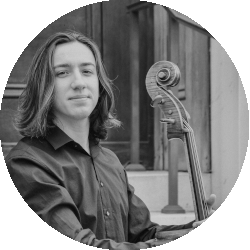 Jorge Giménez (Palma de Mallorca, 2001) began his cello studies at the age of four. From 2011 until 2019 he has been a student of Maria de Macedo in Madrid. He studied a bachelor’s degree in Violoncello Performance at the Conservatorio Superior de Música de las Islas Baleares, Spain, with Prof. Emmanuel Bleuse. He graduated in June 2019 and received the Extraordinary End of Degree Award. From August 2019 to May 2021 he studied with Amit Peled at Peabody Institute of the Johns Hopkins University, Baltimore, MD. He graduated in May 2021 and received the James Winship Lewis Memorial Prize in Performance “for his outstanding accomplishments and contributions to the musical and educational life at Peabody.” During his time at Peabody Institute, he was granted with the “Excellence in Music Leadership Full Scholarship” from The Johns Hopkins University.

Currently he is studying at the prestigious Queen Elisabeth Music Chapel as an artist in residence in the class of Gary Hoffman and Jeroen Reuling and is pursuing his second year of master’s degree in Violoncello Performance at Koniklijk Conservatorium Brussel.

Throughout his career, he has been awarded in national and international competitions, being the last of them, Juventudes Musicales de Madrid Scholarship award (2019), 1st prize at Mount Vernon Virtuosi Cello Competition (2020), 1st place at KPIMC (2020), 2nd prize at the “Gustav Mahler Prize Cello Competiton 2021”, 2nd prize at Park Na competition for violin and cello (2021).

Jorge plays a cello (2022) by Alexandre Beaussart, an instrument on loan from Strings For Talent and the King Baudouin Foundation.

This cello was awarded the silver medal at the International Violin Making Competition of the Philharmonie de Paris. It is based on Antonio Stradivari’s Davidov of 1712.

Passionate about music and history, Alexandre began his professional education with a degree in Art History and Archaeology at the University of Lille, before turning to the manual practice of the arts that are the object of his passions. In order to prepare for his entry into the International School of Violin Making in Mirecourt, he then began a Certificate of Professional Aptitude in cabinet making in Paris, at the La Bonne Graine Institute.

In 2011, Alexandre was accepted at the International School of Violin Making and began his training at the Lycée Jean-Baptiste Vuillaume and obtained his Diplôme des Métiers d’Arts in 2014.

His professional experience at the Philippe Mitéran workshop and the various training courses held throughout France have enabled him to consolidate his techniques, to perfect his listening skills and the finesse of his adjustments, but also to make his first personal instruments, while continuing to perfect his art.

In his work and through his interest in certain trends such as Italian violin making, Alexandre Beaussart seeks to develop his own ethical line by paying particular attention to period methods.

In 2019, he opened his workshop in Vincennes, alongside Audrey Goepp, with whom he can now fully link two passions: modern and antique instruments.

This competition, exclusive to the cello, placed particular emphasis on the sound of the instruments played by the musicians of the Paris orchestra, and judged behind the screen during the final stages of the competition by a jury of three violin makers and three musicians:

President of the Jury: Raphaël Pidoux.

In July 2022, he won the 3rd prize in the Sámuel Nemessányi International Violin Making Competition in Budapest.

Sámuel Félix Nemessányi is considered the most talented and famous Hungarian violin maker, known for his high quality copies and often compared to masters such as the Voller brothers, J.B Vuillaume or Lupot.

Each participant had to copy as faithfully as possible one of his violins inspired by Antonio Stradivari, as a tribute to the Hungarian luthier.

Six violin makers then judged the copies around the violin.

President of the jury: Florian Léonhard.