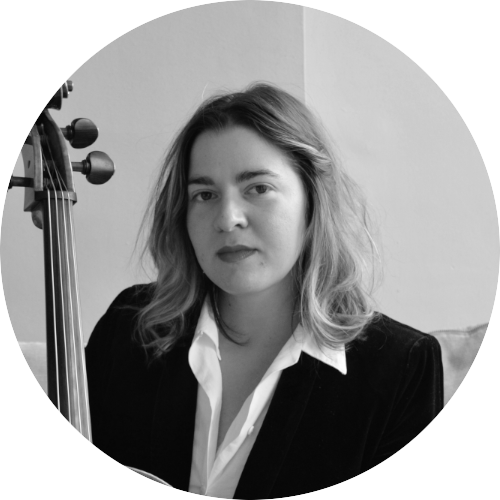 Julia Kotarba, soloist, chamber and orchestral musician, has been acclaimed for her solo and chamber music activities. She is the founder and member of the Karski Quartet, which has rapidly gained recognition on the international music scene, and performs in many international venues.

With the Karski Quartet, she was artist-in-residence at the Queen Elisabeth Music Chapel in Waterloo/Brussels from 2019 to 2022, under the direction of Artemis Quartet members and Miguel da Silva, as well as resident quartet at the Amsterdam String Quartet Biennale 2022. The Karski Quartet was honoured to be selected for the Banff International String Quartet Competition in Canada and received the Christine & David Anderson Career Development Award in recognition of its extraordinary artistic level.

Julia Kotarba began her musical studies at the age of seven with Beata Zalewska in Krakow. She obtained her Bachelor’s and Master’s degrees at the Academy of Music in Krakow, where she studied with Jan Kalinowski. Immediately afterwards she became a student at the Royal Conservatory in Brussels in the class of Jeroen Reuling. A few years later she took a postgraduate course in string quartet at the Academy of Music in Katowice with Piotr Szumieł, violist of the Apollon Musagete Quartet.

She is a former member of the Airis Quartet (2015-2018). The quartet has performed all over Europe and released a CD with the music of Karl Amadeus Hartmann (CD Accord label). Julia Kotarba’s discography also includes “A La Valse” with the Enesco Octet and Ravel La Valse in a new arrangement for a small string ensemble conducted by Philippe Graffin (2021), a CD album of the orchestra Les Metamorphoses and Pieter Wispelwey in a programme of orchestral works by Weinberg (2021) and “W centrum Źrenicy” – an album with the poetry of Janusz Szuber with musical arrangements written by Julia herself, together with Wojtek Inglot and Luke Sabat.

From 2015 to 2019, Julia was the soloist and principal cellist of the Polish Philharmonic Art. Her orchestral experience also includes conducting the cello group of the Beethoven Academy Orchestra and the Przemyśl Chamber Orchestra. She has performed with the chamber musicians of the National Symphony Radio Orchestra.

As a cello teacher, she taught cello at the Domosławice Music School (Poland) in cooperation with the Krzysztof Penderecki Centre of European Culture in Lusławice. She has given masterclasses at the Hello Cello Festival in Krakow and regularly collaborates with the NOR59 Stryke Institutt in Oslo.

Julia Kotarba plays on a cello, made in 2020 by Jan Strick (Maison Bernard, Brussels) which was lent to her by Strings For Talent and the King Baudouin Foundation.

Since 1868, Jan Strick from Maison Bernard has been attending upon a wide clientele of professional musicians and amateurs of fine bowed instruments. Violin maker Jan Strick and Bow maker Pierre Guillaume, both appointed experts to the Prosecutor’s Office in Brussels, have been running together the oldest lutherie workshop in Europe. Settled in Brussels since 1986, they offer a constantly renewed, extensive and unique collection of violins, violas and cellos and their bows. Jan Strick and Pierre Guillaume have earned the trust of important foundations worldwide, of collectors and some of the greatest soloists.