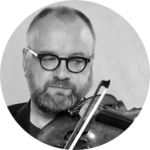 Tony Nys started his musical training at the age of five taking up violin lessons with Tomiko Shida. Later he continued his studies at the Koninklijk Conservatorium Brussel with Clemens Quatacker and Philippe Hirschhorn.

Between 1994 and 1997, he was the first violin of the Fétis String Quartet, attending masterclasses with the Alban Berg Quartet, the Borodin Quartet and the Amadeus Quartet. Ever since, chamber music has been a natural environment for him.

As a violist in the Danel quartet from 1998 up to 2005, he played worldwide in numerous festivals, recordings and performances of newly composed pieces.

Since 2005, he is a fix member of the TrioFenix Stringtrio and he has regularly worked with ensembles such as Prometheus, Ictus, Ensemble Modern, Explorations, Oxalys … Between 2008 and 2018, he was also a member of the Malibran Stringquartet.

He shared the concert stage with many renowned artists and ensembles such as the Borodin Quartet, the Brodsky Quartet, the Petersen Quartet, Garth Knox, Gérard Caussé, Alina Ibrahimova, Philippe Graffin, Frank Braley, and many more …

Tony Nys played as viola-solo in La Monnaie Symphony Orchestra between 2007 and 2018. In that position he was regularly invited by many orchestras in Belgium, Holland, Germany and the UK.

As a member of the Mahler Chamber Orchestra, he played worldwide with conductors such as Claudio Abbado, Pierre Boulez, Gustavo Duhamel …

Currently he teaches viola and chamber music and is head of strings at the Koninklijk Conservatorium Brussel. He also teaches the Advanced Chamber Music Course at the Orpheus Instituut in Gent.